MORE and more people now stay on the outskirts of Greater Kuala Lumpur for work or economic reasons.

Among these major satellite cities are Putrajaya, Kajang and Rawang, and in the second part of our series, StarMetro looks at the major east Klang Valley expressways such as the Cheras-Kajang Expressway (LCK), Kajang Dispersal Link Expressway (SILK), Maju Expressway (MEX), some northern ones such as the Kuala Lumpur-Kuala Selangor Expressway (Latar) and Guthrie Corridor.

One of the primary links between the capital and the country's administrative centre, the KL-Putrajaya/Maju Expressway (MEX) is relatively less utilised compared to other routes linking KL to Putrajaya.

While it begins at the Kampung Pandan roundabout, vehicles travelling to Putrajaya from Petaling Jaya or Bangsar can take the New Pantai Expressway (NPE) untill the Kuchai Lama Interchange to merge with MEX at the NV Multi Asia building.

Contrary to its name, the route actually ends in the Cyberjaya area, near LimKokWing University, and motorists have to take Lingkaran Putrajaya to get to Putrajaya.

This route, also known as the Grand Saga highway after the name of its concessionaire, is one of the main routes into Kajang from central KL, via the Jalan Connaught interchange to Saujana Impian, Kajang.

The Cheras-Kajang Expressway (LCK) started as Jalan Cheras (Federal Route 1) and was upgraded into an expressway in 1998/1999.

Nonetheless, many of the smaller roads, such as around the Batu 9 area are still accessible after the turn-off from Hulu Langat or Telekom.

The road also links from Jalan Cheras, with two tolls at Batu 9 (before Hulu Langat) for Kajang-bound traffic, and Batu 11 (before Balakong) for KL-bound traffic.

As one of the main roads to Kajang and Semenyih, there are eight interchanges, comprising the police's Pasukan Gerakan Am headquarters, Hulu Langat, Telekom, Bandar Tun Hussein Onn, Balakong, Sungai Long, Bukit Dukong and Saujana Impian.

The route also links to the Kajang SILK expressway (See map below) at Saujana Impian, and traffic heading to Kajang can turn off at Bukit Dukong.

The Kajang Silk or Kajang Dispersal Link Expressway is a 37km ring road that bypasses Kajang town while serving as a ring road for the township.

It is split into three sections, namely Balakong and Sungai Ramal that runs in a horseshoe shaped manner and the Sungai Balak section that forms the township's ring road.

Access to Kajang town is possible via the Kajang-Seremban Highway at the Balakong interchange.

Following the Balakong section is the Sungai Ramal stretch, connecting to the Taman Kajang Prima interchange (1805), Kajang town as well as various townships along the way before connecting to the South Klang Valley Expressway and joining the North-South Expressway.

The third section branches off from the Sungai Ramal section and leads to Jalan Sungai Chua and eventually Jalan Semenyih but also links to Saujana Impian before joining the Cheras-Kajang Highway.

From Kuala Lumpur, the 32km Kuala Lumpur-Kuala Selangor Expressway (Latar) begins after the Jalan Ipoh/Templer's Park stretch along federal route one (northbound) and connects Rawang and the Gombak district to Kuala Selangor as well as multiple townships along its interchanges at Kuang, Kundang Jaya, Puncak Alam and Ijok.

The interchanges offer linkages to and between towns that are situated along the mid-eastern part of the Klang Valley such as Bandar Tasik Puteri, Bestari Jaya (Batang Berjuntai), Puncak Alam, Rawang, Kundang, Sungai Buloh, Ijok and Assam Jawa.

It also connects to Shah Alam, Bukit Jelutong and the North-South Expressway (Rawang South interchange) via the Guthrie Corridor Expressway (GCE) at the Kuang interchange.

The highway forms part of the Kuala Lumpur Outer Ring Road (KLORR), providing a link from the GCE to Gombak and on to the yet-to-be-built Eastern Klang Valley Expressway (EKVE).

According to information provided by concessionaire KLSEB, Latar registers an average daily traffic (ADT) of 60,000 users.

That volume rises by 40% to 50% during major festive seasons, although KLSEB said it had yet to register any traffic congestions during those periods. 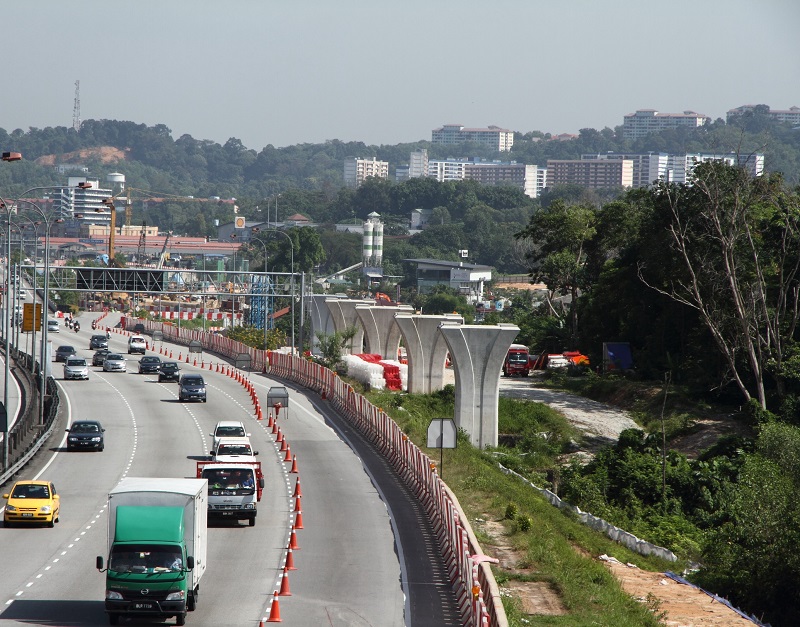 Vital route: The Grand Saga Highway after the Batu 9 toll plaza, near Kampung Sungai Raya is one of the main routes into Kajang from central KL.

The highway also provides a linkage to the Kuala Lumpur Middle Ring Road 1 as well as Kampung Baru, Sentul and Titiwangsa via the Jalan Tun Razak interchange.

Exiting at the Jalan Jelatek interchange will connect motorists to Taman Setiawangsa, Wangsa Maju and the Duta-Ulu Kelang Expressway (Duke).

At the same time, the interchange towards the Kuala Lumpur Middle Ring Road 2 (MMR2) connects to Ulu Kelang and the Hulu Langat district.

Traffic does tend to build up on the highway during the evening rush hour, especially at the toll plaza due to the influx of traffic from the Jalan Tun Razak interchange.

Dubbed by concessionaire Prolintas as 'A Shortcut to North and South', the expressway runs from Shah Alam starting at the Jalan Montfort / Jalan Subang junction towards the northern Klang Valley with its tail-end linking to the North-South Expressway after the Rawang interchange.

It offers commuters from Subang Jaya, Klang and Shah Alam an alternative route to the north, bypassing the heavily congested stretches along the NKVE (Subang and Damansara stretches) and North-South Expressway as well as linking to the western Klang Valley via the Kuala Lumpur-Kuala Selangor Highway.

Exiting the GCE during the evening rush hour is a concern for motorists heading towards Subang Jaya due to the long wait at the Jalan Montfort traffic lights and the heavy vehicles in Shah Alam and Glenmarie heading towards the Federal Highway.

The Kinrara-Damansara Skyway (Kidex) has been weighing heavily on the minds of many Petaling Jaya and some Puchong residents. This 14.9km-long elevated highway will begin from the NKVE's Damansara Interchange and terminates near the Kinrara area.

About 90% of it will be elevated, running by or above landmarks such as Tropicana City Mall, Section 14, the Federal Highway and parts of Petaling Jaya Selatan before hitting the Bukit Jalil highway.

Residents opposed to Kidex say there are enough highways and building another one is not a solution to the Klang Valley's traffic woes.

The planned highway begins from Puncak Perdana U10 off Jalan Batu Arang and terminates at the Penchala Link with access to both the Sprint and LDP.

However, this expressway has also come under fire with residents from the Damansara Perdana/Mutiara Damansara area protesting its proximity to their homes.

The second of the recently-inked deals by Prolintas, the proposed 31.8km, elevated three-lane carriageway will begin from the Sri Petaling Interchange (near the Bukit Jalil Stadium) and will run through Sungai Besi and Alam Damai.

The alignment would not only allow for access to the Kesas and Sungai Besi, Akleh and Duke expressways, but also provide an alternate route for traffic on the Middle Ring Road 2.

Its construction and land acquisition cost is expected to be about RM4.3bil.

This planned 39.5km long expressway will complete the Kuala Lumpur Outer Ring Road. It will connect the Karak Highway, Sungai Pusu and the International Islamic University Malaysia in Gombak to parts of the city centre (Setiawangsa and Ampang) and the Hulu Langat district on its way down to the SILK highway in Kajang.

The development has been notable for protests because it will encroach into forest reserve and a public de-gazettement hearing is in progress.